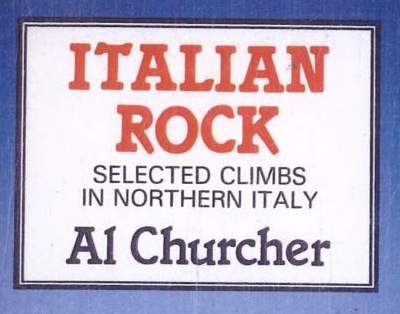 Described in Miotti's Strutture di Valtellina as a ‘little piece of England in Italy’, La Caürga di Sirta rises steeply up behind the vllage of Sirta and its domed church, and can be clearly seen from the main Valtellina road. As the original routes are a complexity of variant starts and finishes, those described below are a selection of the most logical combinations, and have been given the name of the principal pitch.

Access and Deecent
From the point where the road from Mello meets the Valtellina, turn east towards Sondrio for a short distance before taking the first turning on the right. Park in the village square near the church, from where a well-constructed path leads to the foot of the crag - about 2 minutes. Scramble up and right from the top of the climbs, and descend to the right of the cliff. The crag faces south-west, giving steep, sunny climbing on solid gneiss with good protection from nuts and in-situ pegs. It has been reported that many of the peg-bolts have now been replaced by spits. Described from left to right. 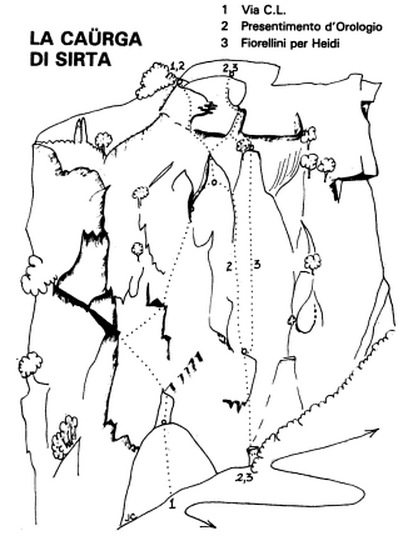 Arrigoni at al. FFA Merizzi & Miotti 6/77
Start on the left of the main face where the path meets the cliff at the foot of an obvious slab.
1. 10m 4b. Climb the front of the slab to belay at the top (or scramble up the ramp on the right).
2. 30m 5b. Climb onto the block above and traverse diagonally leftwards almost to the arete at a point level with a large roof. Return diagonally right and cross a small roof (crux) on the right before following a crack above to belay in a large niche.
3. 10m 4c. Up the ramp to the right, and traverse horizontally right to belay.
4. 30m 5c. Zig-zag up flakes to a pine tree, and go left to a steep crack. Up this with one hard move.

Presentimento d'Orologio 80m E3 6a
Miotti & Merizzi '78 (and '80 Gorilla Lilla start).
Scramble up right from the start of CL, to a square cut ledge just below the point where the path curves back to the foot of the cliff.
1. 50m 6a. Climb the steep rib above the left end of the ledge to a second ledge (possible belay).Continue up the scoop on the left passing several pegs, and make hard moves left to reach a stance.
2. 30m Finish as for CL, or go up a little as for that route and take the crack system further right (5b).

Fiorellini per Heidi 35m E4 6b
Miotti & Merizzi '80
Start at the right-hand end of the second ledge of Presentimento, either by that route or the ramp/corner further right.
1 . 35m 6b. Climb the yellowish wall leftwards to a crack. Follow this to a black corner leading leftwards to a peg-bolt. Make hard moves past several more peg-bolts until it is possible to traverse
left to join the right-hand finish to Presentimento. (A more difficult variant takes the scooped wall directly above the ledge - protected only by peg-bolts which are reputed to be less than bomb-proof.)

The continuation of the ramp/corner alternative start to Fiorellini is Rebus Gravitazionale 65m 5c. From a stance above the corner the route takes a diagonally leftward line following flakes and cracks.
Two new climbs take the smooth wall (Parete Liscia) between CL and Presentimento. Following lines of closely set peg-bolts, theleft is said to be 5c/6a, the right 5b.